Ever since I really started listening to music, Everclear has been my favorite band. Their perfect mix of rock, alternative, and pop combined with straightforward honest lyrics covering a full span of raw emotions makes their music applicable for any mood. Art Alexakis is the only remaining member of the original band, but as lead singer and songwriter, for all intents and purposes he IS Everclear.

“In A Different Light” features re-recordings of many of Everclear’s best songs from the 90’s and 00’s. It’s somewhere between a greatest hits album and a remix album, but rather than completely overhauling each song, the sound has been ‘tweaked’ to give a slightly different feel. In general, the lyrics to all the songs are identical (save for a few minor word changes), but the timing, tone, and emphasis are completely new. Most songs have a softer, stripped down feel compared to the originals, yet no so much so that they become dull. It is also refreshing to hear cleaner, polished versions of older grungy songs such as Santa Monica and Fire Maple Song, even if they don’t seem to convey as much emotion. Really, none of these updated versions can compare to the originals, but they are still very nice to listen to, especially for Everclear fans such as myself. This collection is almost a curiosity, but one that does not disappoint. Two new songs also accompanied on the album, At The End Of The Day & Here Comes The Darkness, and these are also pleasant to listen to. Everclear’s “In A Different Light” is a unique type of album, and those who are familiar with the songs reworked here will surely enjoy it.

I’d like to think I was the very first person to purchase this album, since I was able to buy it one day in advance of its release at the first show of Everclear’s latest tour, and I was pretty much the first person to arrive at the venue. Being the first to arrive also meant I was front row center for the concert and got to take home a guitar pick and set list as souvenirs. The next best thing about concerts, after seeing your favorite band play, is taking home memorabilia! Art Alexakis was also available to meet and give out autographs (he signed my album cover, as you can see above), which was actually really cool of him. Of all the concerts I have been to, the main act has never been available to meet. And as it turns out, he’s a really friendly guy. In all, it was an excellent concert, and I was glad I finally got to see them live, despite that the lineup is different than the Everclear I grew up on. 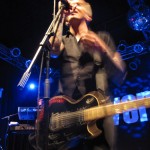 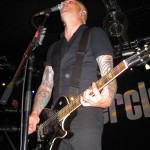 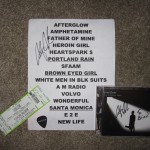 Up until only a few months ago, the only Eric Clapton songs I was familiar with were the overplayed popular hits of his solo career during the late 90s: Wonderful Tonight and Tears In Heaven. While both are amazing songs, I never gave the artist usually associated with my parents generation much further interest. However, after reading Eric Claptons autobiography this weekend, I was inspired to listen to some of his older material. From my reading, Claptons time playing under the band name Derek & The Dominos seemed to be a highlight of his career, a time when he was able to have the most fun and musical creativity just carelessly jamming with fellow musicians.

And of course, I already loved the song Layla. Layla is one of my favorite songs of all time and as a result I didnt expect the rest of the album to live up to quite that level, but I was hoping to hear at least a few more decently good songs. Much to my excitement, the album exceeded my expectations. Overall, the album is excellent. There are some very good tracks here. Some are slower like Bell Bottom Blues and Nobody Knows, but these are balanced by much faster ones such as Why Does Love Got To Be So Sad. The guitaring, needless to say, is amazing. On the Keep On Growing solo, the last two minutes are full of such quality sound & depth that I wish the solo wouldnt end. It is surely a treat to listen to. Similarly, Key To The Highway is basically one non stop solo that stretches on for nearly ten minutes, yet, I hardly noticed the lengthiness at all because it was so captivating.

Derek and the Dominos was formed in 1970 by Eric Clapton along with Bobby Whitlock, Carl Radle, and Jim Gordon, who had all played in the band for Delaney & Bonnie. Duane Allman, of The Allman Brothers Band, joined as well later on. It is a shame that the band dissolved due to band member differences soon after this album was released, because I would have loved to hear more of what they could have produced.

Layla and Other Assorted Love Songs is an excellent 70s album, highly recommended for any true fan of rock.