I usually export my MATLAB figures to Adobe Illustrator .AI format. However, I have noticed that if my figure contains a colorbar, the colormap is blank when I open the AI file in Illustrator.

To fix this, I found that you can instead save the figure as an EPS file (*.eps, standing for Encapsulated PostScript). This file can be opened in Illustrator, and still contains all the layer and path information I need.

Another useful trick I use before exporting a figure with colormaps is to increase the step size of the colormap. By default, the colormap contains 64 colors, but you can usually see the edge between each color. To smooth out the colormap, I like to use:

This tells the colormap to use 256 colors instead of only 64. Of course, the colormap gray can be replaced by any other colormap name, e.g., hsv or jet. 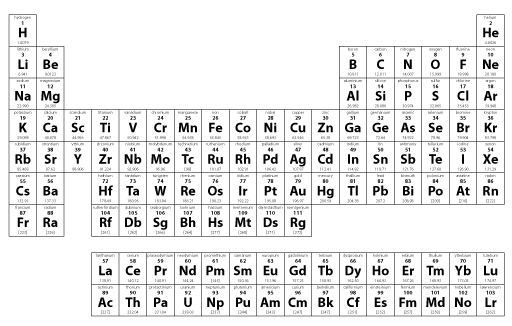 My source for the data was from the International Union of Pure and Applied Chemistry (IUPAC), 2007 (http://old.iupac.org/reports/periodic_table/).

If you want to change the font, color, or size of all element properties at once, I have tagged each object type with its own Attribute Note (element_name, atomic_number, element_symbol, atomic_mass, box). For information on how to select objects with the same attribute note, please see my previous post on that topic: How to select the same sub-objects in multiple copies of a group in Adobe Illustrator

This work is licensed under a Creative Commons Attribution-ShareAlike 4.0 International License.

Grouping in Adobe Illustrator is a useful tool to “bundle” objects that need to be moved around together. Groups can also easily be duplicated to create multiple instances of a set of objects. However, what if you needed to change a property of one particular object within all copies of a group? There is no easy way to select all sub-objects of the same type. If you are editing within a group, you might try Select > Same > Appearance, but this will only select objects within the current group, and will not expand the selection to other copies of that group. In the Layers palette, you might be able to select the specific sub-objects you want inside of each group, and then perhaps save the selection for use later (Select > Save Selection). But this can be tedious, especially when there are a large number of group copies.

The simplest solution I found to selecting identical objects within multiple copies of the same group involves use of actions and the Note feature in Illustrator. This must be done before copies of the original group are created.

This procedure creates an action which selects objects with the same note text, no matter what group they belong to. Now, you can duplicate your group as many times as you want. Running the action (by clicking the “play” icon when selected in the Action palette) will now select all of the same sub-objects in every instance of the duplicated group. This way you can easily modify each one at the same time!

Setting Note text for objects is an easy way to select specific sets of items later, but it is particularly useful when dealing with objects within groups. This tutorial was written with Adobe Illustrator CS4, but the method should work for other versions similarly.